On Sunday, the 1st of May at 2pm, Lewes Drama Collective’s venturesome Saturday Youth Group will perform the perennial favourite children’s story of The Railway Children at the All Saints Centre.

Originally serialised in The London Magazine in 1905, The Railway Children by Edith Nesbit, was published in book form for the first time in 1906 and this stage version was written almost 100 years later, by Mike Kenny in 2010.

The captivating story follows a fairly well-to-do family that has to move out of London to a simple country cottage near a railway, after the father, who works for the government, is falsely accused of espionage and sent to prison. After befriending a porter and station master at the local railway station, the well-mannered children Phyllis, Roberta (nicknamed “Bobbie”) and Peter are eventually able to help prove their father’s innocence before being reunited once again.

“Lavish, warm-hearted… one of the very finest children’s stories of the 20th century, and it is served superbly by Mike Kenny’s adaptation”
― Whatsonstage.com 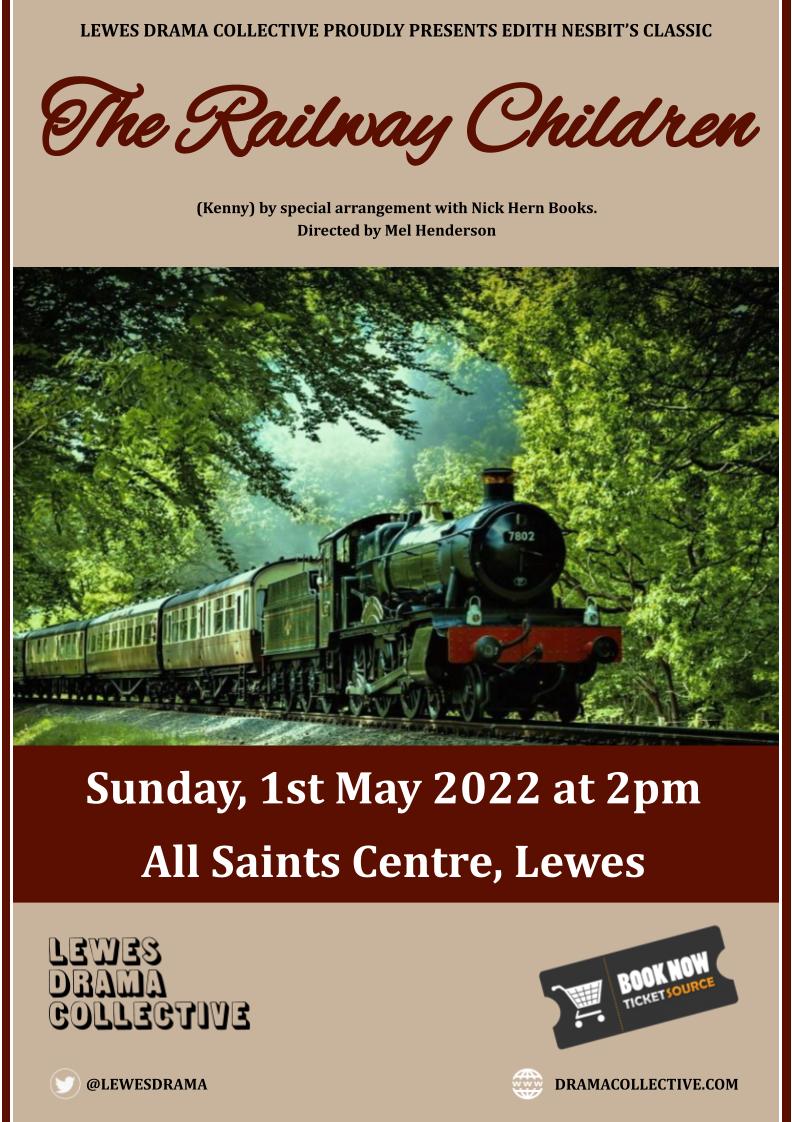 Famously filmed in 1970 and adapted for radio, stage and television on numerous occasions (four times by the BBC since 1951 and in 1999 by ITV at the Bluebell Railway with their magnificent steam engines), this timeless story of a family forced into hardship and a complete change of circumstance and socio-economic position, captures the anxieties and exhilarations of childhood with great tenderness and insight.

“Mike Kenny’s adaptation shows his mastery of playwriting for children and families… adults and children alike are enthralled by the clever mix of imagination and reality.”
Financial Times

Mike Kenny’s version of The Railway Children was first staged at the National Railway Museum in York in 2008, before receiving a major production at Waterloo Station in London in 2010 where it won an Olivier Award for best entertainment in 2011.

This production will be presented on stage in Lewes, East Sussex at the wonderful multi-purpose community venue, the All Saints Centre, which is easy to get to by public transport (Southern Railway, Brighton & Hove Buses and other local bus companies) as well as invaluable community transport on routes between Eastbourne, Seaford, Haywards Heath, Newhaven, Tunbridge Wells, Uckfield, Brighton and London.

On behalf of the Lewes Drama Collective, the directors and cast members wish to thank everyone involved, including the invaluable voluntary team members, parents of our talented production participants, the venue and fantastic staff, East Sussex County Council and the Lewes Tourist Information Centre.

We look forward to announcing news of our next shows in due course and welcome those who’d like to try their hand at anything on or off stage – please note that we will be casting for our main Winter productions before the summer holidays begin.

Children and teens are invited to enjoy a free taster session at any of our drama groups – to request more details please complete our online form or send an email to enquiry@dramacollective.com.