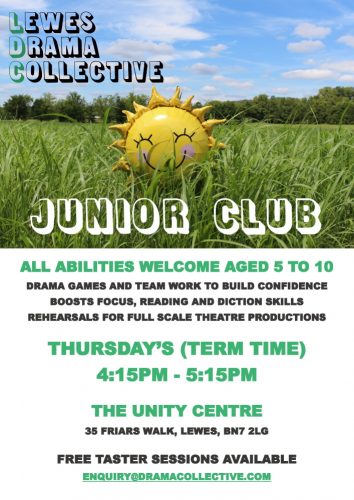 Founded in 2015, our young and aspiring members have put on some fantastic productions, including The Lion, The Witch & The Wardrobe, The Wizard of Oz and Rudyard Kipling’s classic tale of The Jungle Book.

Their last live full stage production was an original brand new panto inspired by the 300 year old legendary tale of Robinson Crusoe, written by Tim Rowland. The funny and traditional Christmas pantomime was performed on 22nd December at the All Saints Centre to a very high spirited audience which sang, stomped and clapped along throughout the show. We are extremely grateful to all who took part, volunteered their time and cake baking skills, as well as to the local businesses who very generously donated raffle prizes which helped to raise collectively £100 for The Flying Seagull Project and the Starr Trust.

The next Junior Club live performance is a festive Collection of Christmas Entertainments, currently planned for Sunday 20th December at the All Saints Centre in Lewes.

This award winning group of actors and stage management members has been running for well over a decade now and over the years, members have presented shows on stage at the All Saints Centre and in the past as part of Lewes Little Theatre’s main season. Most recent productions include His Dark Materials (Parts I and II), Robin Hood, Around the World in 80 Days, Treasure Island, Alice in Wonderland, The Hound of the Baskervilles and The Lion, The Witch and The Wardrobe.

The next Youth Group live performances take place on 24th October at the All Saints Centre in Lewes are “Lord of the Flies” by William Golding (adaptation by Nigel Williams) at 3pm and “This Changes Everything” by Joel Horwood at 7pm.

Thereafter, we will continue with rehearsals for our on-stage productions of a dear favourite, C.S. Lewis’ Alice in Wonderland and the much-loved comedy The Importance of Being Earnest by Oscar Wilde, which are planned to take place at the end of January 2021 and early February 2021 at the All Saints Centre in Lewes.

Other productions that our talented and dedicated members have performed over the years, comprise a portfolio of current and traditional stories such as: The Adventures of Jason and the Argonauts, Collected Grimm’s Tales, The Caucasian Chalk Circle, Animal Farm and a number of unique variety shows wherein members have showcased their abilities and choose their own pieces and performing arts methods. 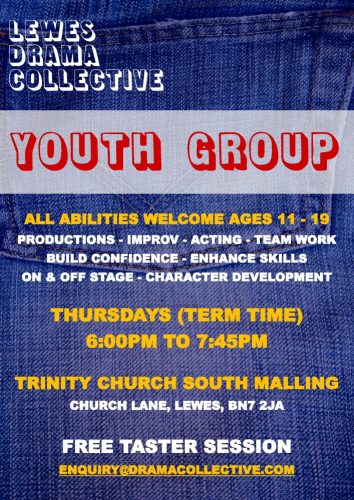 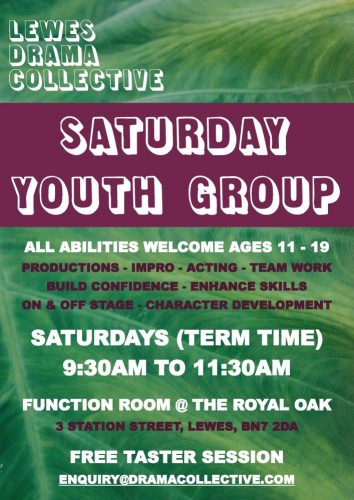 For more than eight years, our Saturday members have developed a keener understanding of self, created their own unique multi-media productions, and performed a number of small scale productions, including for instance Pinero’s Victoriana comedietta – Trelawny of the ‘Wells’ (on-stage at the All Saints Centre) and a radio play collaboration with the Youth Group of Floyd Dell’s – King Arthur’s Socks and Other Village Plays.

Currently our fantastic group members are rehearsing for our March 2021 production of Dexter and Winter’s Detective Agency.

A brand new Tuesday evening group created in response to our members wish to continue some of the voice and improvisational skills developed during their involvement with our fun virtual Easter and Summer schools which took place this year via video conferencing.

Members are learning a variety of acting techniques such as character development, improvisation, voice exercises, breathing techniques, improvisation and method acting. These sessions aim to boost concentration as well as skills in presentation, teamwork and enhanced confidence. Each term we work through a different and fun radio or stage script and explore characters. So far we’ve enjoyed Flash Gordon and Dragnet. 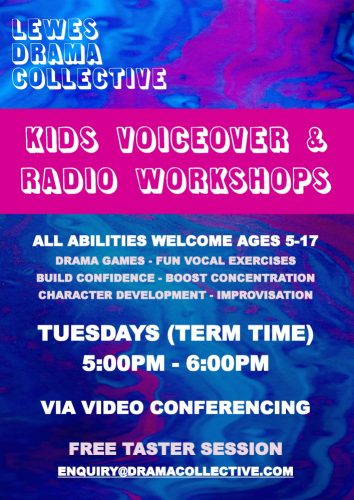 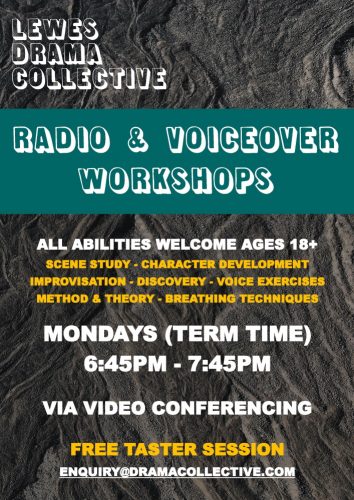 Our Adult Acting Group performed their very first show at the All Saints Centre in Lewes on 15th September 2019 titled Beatus Medium – a brand new play by Tim Rowland. Their last production was Dracula: The Bloody Truth, which was also very well received and enjoyed by our audience members.

During the pandemic, this Monday evening group transitioned from stage to online video calls to continue their vocal training and acting tuition. Due to lifestyle demands and pressures of a healthy work-life balance, the workshops will remain virtual and the group is currently exploring a diverse range of radio and stage plays.