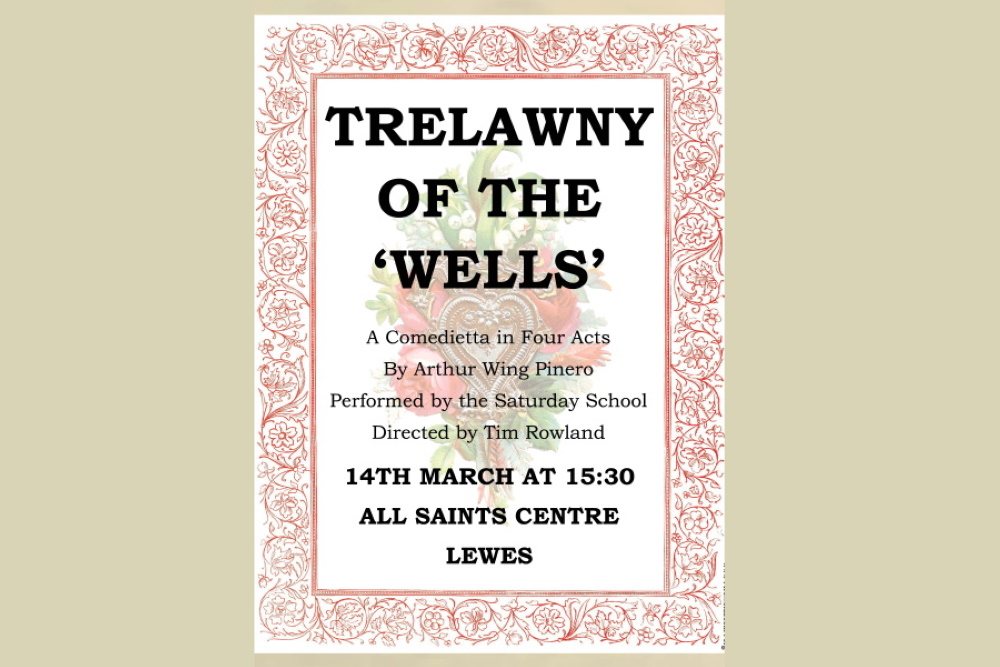 Trelawny of the “Wells” is an 1898 comic play with four acts set in the 1860’s by Sir Arthur Wing Pinero, who started his career in British theatre as an actor at the age of 19 and between 1877 and 1934 was a successful society dramas and comedies playwright.

This particular production, which takes place on the 14th of March at the wonderful All Saints Centre, tells the story of a theatre star, renown for her performances in melodrama plays – Rose Trelawny – who tries to give up the stage for love when she marries her well-to-do sweetheart, Arthur Gower. Alas, the family life turns out to be too dull for her outrageous personality and Rose finds it rather difficult to fit into conventional society.

Feeling rather fed up, Rose runs back to the theatre (abandoning her husband), however when she attempts to get her life back in order as she was accustomed too, Rose becomes desperate as her experience of the “real world” has affected her talent for melodrama. She becomes frustrated and finds it impossible to recapture that special something that had made her a star. Meanwhile, her husband Arthur secretly runs away to become an actor himself at the Bristol Old Vic.

However, all is not lost as Rose manages to turn her life around when she reawakens an old friend’s love for the theatre and gathers a supporting troupe around her of talented performers and an aspiring playwright, who in the end re-unite her on stage with her old flame.

Trelawny of the ‘Wells’ has been on stage at various points in London and New York since 1898, for instance at the old Lyceum Theatre and the Old Vic. In 1916, the play was adapted into a silent film which was directed by Cecil Hepworth and starred Alma Taylor, Stewart Rome, and Violet Hopson. The play was again adapted in 1928 by movie making Hollywood powerhouse Metro-Goldwyn-Mayer and titled The Actress, with Sidney Franklin as director and Norma Shearer as the star of the film. More recently, the play has starred a number of talented actors on stage, on TV and in the cinema with Arthur Cox, Jason Connery, Patricia Brake, Sarah Brightman, Peter Bayliss, Helena Bonham Carter, Richard Bremmer, Helen McCrory and Adam Kotz.

This play provides our Saturday School members with the ideal platform through which to explore the changing face of late-19th-century theatre, as well as bring the experience of a fine melodrama to a contemporary audience for a one-off performance in Lewes.