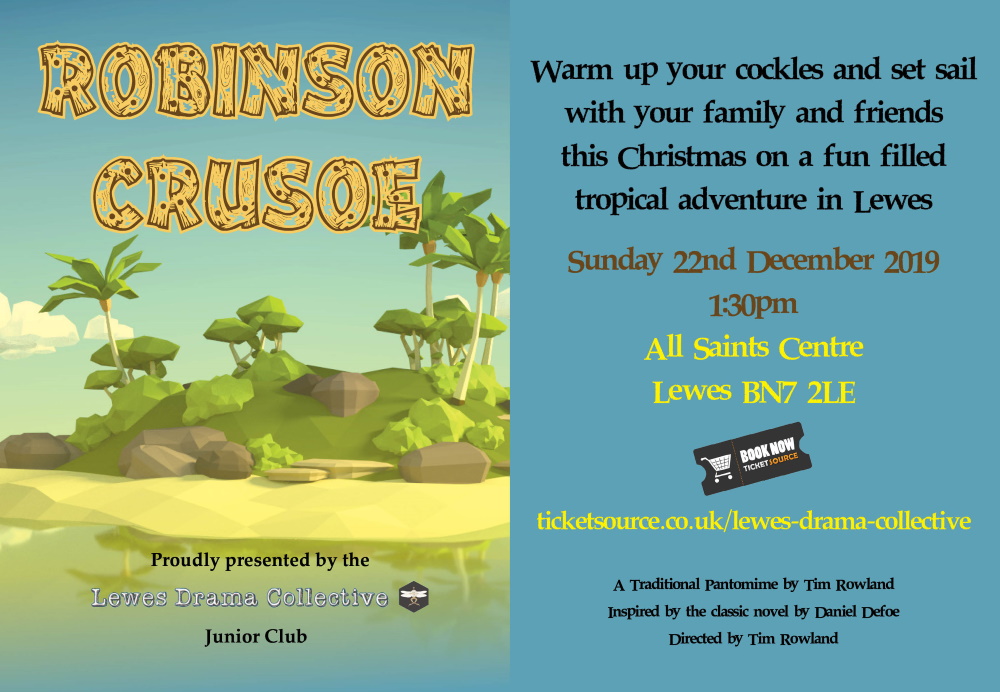 Set Sail this Christmas on a Fun Tropical Voyage

Proudly presented by the Lewes Drama Collective’s awesome Junior Club, this brand new pantomime adaptation of the famous “Best Selling” novel Robinson Crusoe is set to warm up your cockles this Christmas.

Despite his tenacity for adventure, Robinson has always had rotten luck on each voyage aboard the trustworthy Black Pearl with disastrous endings!

His doting mum, Dolly and younger brother, Billy, have always been positive and supportive of Robinson in whatever made him happy. Whereas his studious Father, Fritz and pompous older brother, Dennis just want Robinson to stop sailing around the world and sit alongside them at the less exciting family firm of solicitors. However, Robinson favours his freedom and it would appear that lady luck may have just arrived for him…

One fortuitous evening at the local tavern, Robinson believes that his life is about to change for the better forever! Whilst enjoying a few bottles of rum with his crew to celebrate his engagement to a beautiful girl (which his audacious shipmates aren’t too happy about), Black Beard reveals that they are about to leave behind their life of crime and team up with one of the King’s men, Captain Perkins. Before setting off however, they would need some extra crew first.

After some strenuous trials, which Robinson must complete in order to prove his worth, he earns a place on the once in a lifetime voyage across the oceans to travel to lands yet to be discovered. Is Robinson’s luck about to change? Could this be the voyage that makes him rich and finally wins the respect of his Father?

As the crew set sail from London, an exciting adventure unfolds full of new opportunities, friendships, some risks and romance. The only way for Robinson to survive is to use all of his cunning and skills to ensure a safe passage off a tropical desert island.

Treat your loved ones to an afternoon of traditional silly fun just a few days before Christmas Day and join Robinson Crusoe and his friends as they explore the world to find their fortunes on the high seas.

Tutored and directed by qualified theatre practitioners, our talented cast will perform this amusing show dressed in 17th century period costumes. Audience members will celebrate a modern take on a thrilling 300 year old story written by Daniel Defoe and originally published in 1719, whilst embracing a joyous experience for all ages to participate in.

So come along and laugh at the daft shipmates, help Robinson to avoid danger and sing along to some fantastically silly sea chanteys.

Robinson Crusoe will be presented just the once at the All Saints Centre in Lewes on Sunday, 22nd December at 1:30pm.

Doors open at 1pm and refreshments will be served during the interval.

Please note that as there will be some flashing lights and loud sounds at certain points in the production, we would advise that children no younger than 5 years old should attend. However, it is of course at your own discretion.